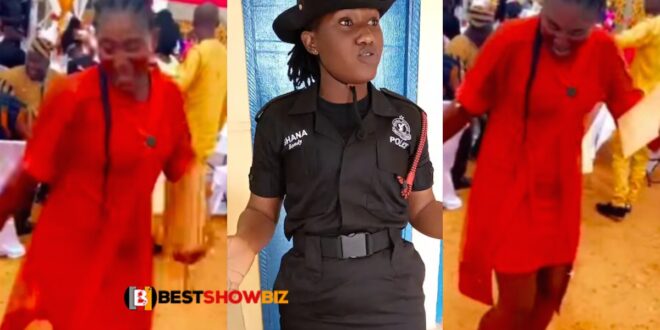 She was full of life: New video of Police Officer dancing at a wedding 5 days before her [email protected] pops up

Constable Sandra Ababio’s tragic death has been the trending news throughout the week.

A new video of a beautiful police officer a few days before her ultimate death has surfaced on the internet.

As a reminder, Damango police Constable Sandra was reportedly slain by her lover who had come over for a stay.

According to the landlord, the boyfriend, who is being sought by the police, was the last one to see her before the event occurred.

Various tales claim that she was having an affair with a military guy and murdered her out of jealously.

A video showing constable Sandra dancing at a wedding five days before she was murdered, on the other hand, has gone viral.

Read Also  Theif reports himself to the police station after things he stole from an old lady gets stuck on his head.