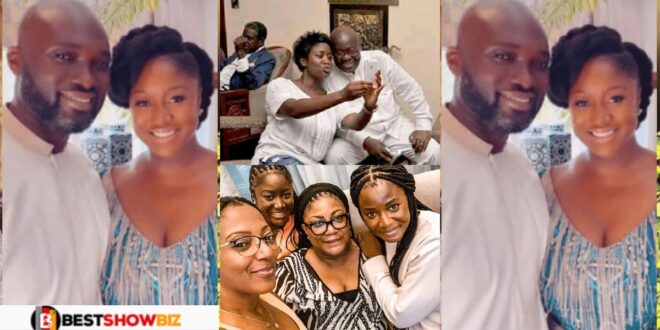 Maxwell Kofi Jumah, the father of the groom, Kwabena Jumah, who married President Akufo-daughter Addo’s Edwina Akufo-Addo, has shared the story of how the two came to be together.

As reported earlier, Edwina Akufo-Addo married Kofi Jumah in a traditional ceremony at the Jubilee House’s Presidential Villa over the weekend.

In an interview with Okay FM on Monday, Maxwell Kofi Jumah revealed that his son once wanted to introduce him to a lady he met in America as the woman he would like to marry.

He was in the dark because he did not know anything about the aforementioned lady.

Although she maintained her modesty and did not behave in the manner of a president’s daughter, when he met her for the first time, he recognized her as President Akufo-daughter. Addo’s

When I found out it was the President’s daughter, I had to look at my son’s level of commitment to the relationship because this isn’t something you can enter and leave right away.” “I needed to make sure he was interested in the young lady,” he explained.

“My son told me that they met in America and that she had no idea I was his father and that he had no idea the President was her father.” He stated that they had known each other for four years, he said.

Kofi Jumah went on to say that his son’s marriage should not be politicized in any way.

In his remarks, he praised Edwina’s unique characteristics and expressed his best wishes for the couple’s future success.