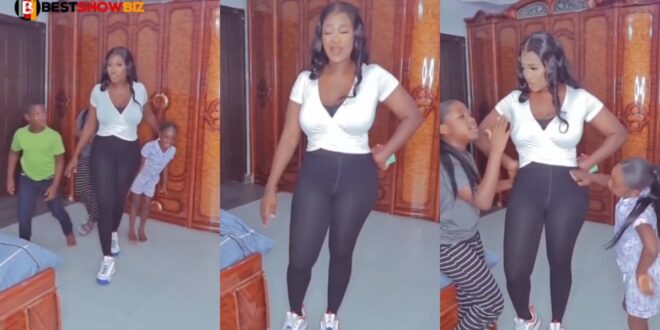 well-known Nigerian actress, Mercy Johnson appears to be pleased that her children are following in her footsteps when it comes to being fearless in front of the camera.

The actress uploaded a sweet video of herself with her first three children, Purity, Henry, and Angel.

Mercy was dressed elegantly in black jeans and a white blouse, with matching sneakers.

The actress looked stunning and appeared to be quite pleased with her physique as she flaunted it in front of the camera.

Her children, on the other hand, were all over her as she sought to promote her goods for slimming down women.

She then sought the assistance of her children, who appeared in front of the camera to inform her followers about their mother’s goods.

Purity saw that her mother’s tummy appeared flat despite the fact that she had four children.