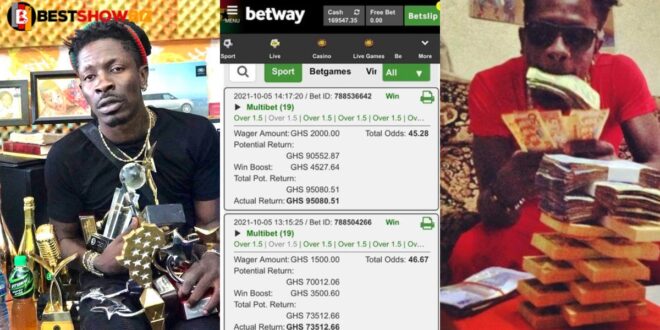 Shatta Wale wins Big as he chops over Ghc160,000 from Betway

Shatta Wale has made it clear that he, like any other hardworking young Ghanaian, is willing to put his money on the line.

Consequently, Shatta Wale left his followers flabbergasted when he uploaded photographs of his large Betway winning slips to inspire his fans, particularly those who are involved in the sports betting industry, on Twitter yesterday afternoon.

Many of his supporters raced to his comment section to express their gratitude and urge that he transfer their share of the spoils to them or send them odds for the upcoming Premier League and La Liga fixtures.

Take a look at the screenshot below: