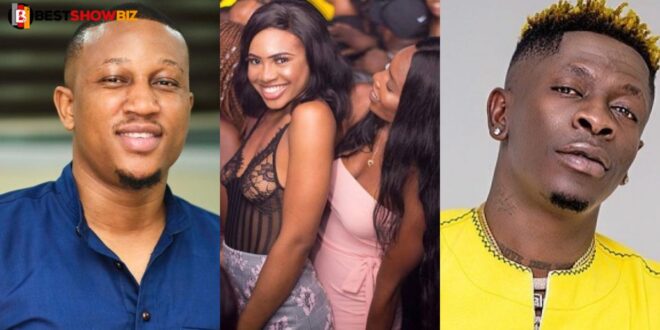 The feud between Shatta Wale and Sadiq Abdulai Abu continues to intensify as the two engage in heated exchanges over the phone while attempting to discuss their differences in a private setting.
Recently, the Chief Executive Officer of Fantasy Entertainment, Leslie, attempted to get the dancehall artist and three-time 3Music Awards founder back together via a phone call. However, what was intended to be a peaceful conclusion escalated pretty rapidly.
Leslie pleaded with Shatta Wale to let go of his rage and allow for peace to rule, but the “Ayoo” singer refused and insisted that Sadiq apologizes on his behalf.

Sadiq responded by accusing Shatta Wale of engaging in political maneuvering, but the singer’s response sparked outrage, resulting in a heated exchange of insults.

Even after Leslie attempted to bring the scene under control, the two refused to stop insulting one another.

Later, Shatta Wale posted a video of the heated exchange on his Facebook page, revealing that he had filed a police report and that Sadiq should expect to be arrested as a result of the incident.

“This is the threatening message from Sadik when we were having a conversation with of. It’s on a record at the police station, and you will be picked up soon,” Shatta Wale captioned the recorded conversation.

It all started two weeks ago when Shatta Wale took potshots at individuals who put a lot of time and effort into their music videos. According to what he stated on Snapchat, if “you keep making videos like you’re trying to combat Jay Z, one day you’ll wake up and ask me how I made all this money… and I’ll tell you this.”

The comments he made aroused outrage among some people who are involved in the music industry.

“Wale is always making hollow arguments and running in circles. Who says that today one can’t know exactly how much one makes on a song or video? How such narratives are allowed to fester is shocking.”

“When I started out in the industry in 2004. Then Shatta was an underground artiste. When he re-emerged in 2013 I was programming/productions dir. At Viasat1 & my artiste had won the Reggae/Dancehall song & act of the year over him make e cause commotion so who is the aba fresh nu?”