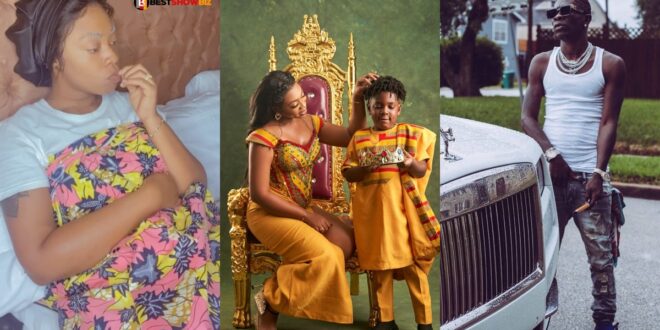 Majesty, Michy, and Shatta Wale’s son turned six years old today, July 11, and his mother celebrated his birthday by having him baptized in a Roman Catholic Church.

Michy shared a video of the ceremony along with a heartfelt statement on social media, praising God for providing her with a son but failing to mention Shatta Wale, who was not there for his kid’s dedication.

”God gave this little boy Maj to me to fill any empty spots in my life, because of him, I feel complete, and just right that I dedicate him back to our good lord to thank him for six years of growth.

”Many didn’t leave the labour ward, but here we are, six years later. May His name be praised. The ordinance of Baptism. Now that I’ve given to God what belongs to Him, I can flood your timelines,” her post read.

Charty wearsgh, an astute fan, commented beneath the post, encouraging Michy to give credit to Majesty’s father because she is not a single mother.

”God gave him to you and his dad, so please stop acting like you are a single mom,” Charty_wearsgh said.

Michy responded to Charty wearsgh’s comment, and it appears that she spoke more than she intended.

”Charty_wearsgh, you pay school fees for me?” she asked, ‘No, then shut up respectfully. Don’t say what you don’t know,” she added.

Despite the fact that her comment has now been removed, a screenshot of it is circulating on social media, with many claiming that she implied that her baby daddy does not pay his son’s school expenses.