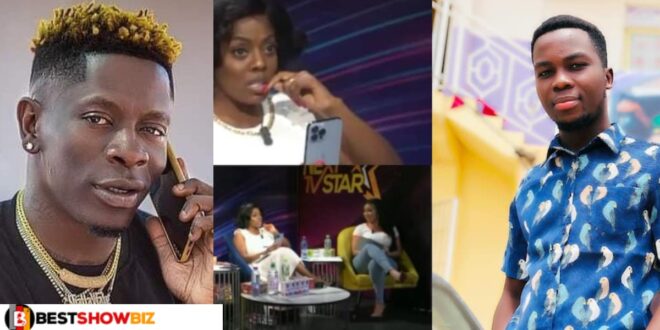 Shatta Wale calls for the arrested of journalist Albert, after he was disgraced for insulting celebrities

While applying for GHOne TV, the blogger got into trouble after meeting celebrities Nana Aba Anamoah, Serwaa Amihere, and Bridget Otoo. The blogger was apprehended and charged with libel.

The three main media personalities ripped into the blogger like a pig when he appeared in front of them at the Next TV Star auditions.

A blogger Albert, better known by his stage name Bongo Ideas, is accused of repeatedly disparaging the three media figures.

The blogger was chastised by Nana Aba, Serwaa Amihere, and Bridget Otoo, who told him to walk out of the premises with his head lowered in shame. It was the ideal time for them to express their wrath.

In response to the news, the self-proclaimed Dancehall Artiste made a video in which he jokingly suggested that the blogger be put to prison, notably the Ankaful Prison, where he had previously spend a week on remand for what he had done.

Here is his response:

“MR why should I … if I talk say school no go far, u ppl go talk nonsense ..Twitter educated ppl see ur fam oo… I swear this boy for go jail …ankaful.”