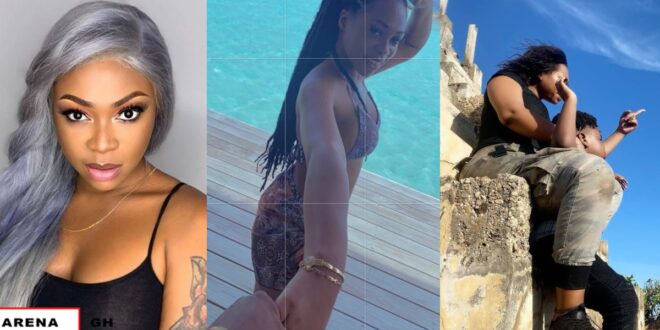 Majesty, the mother of Shatta Wale’s son, announced this in a new Instagram post on Saturday, May 22, 2021.

Michy’s post features photographs and videos from a holiday she is taking with her boyfriend in the Maldives, a renowned tropical vacation spot in South Asia.

Michy is seen wearing a bikini and standing alone in the first photo seen by Arenagh.com.

Michy was partially showing off her new bae in the second shot.

She strutted about in her bikini, clutching the bae’s wrist, which was adorned with a bracelet that matched the one she was wearing.

Michy was already wearing a bikini in the third shot, and she was standing alone in portrait mode with her face to the camera.

Michy revealed footage of some of the stuff she has been up to on the island in the next two slides.

Michy did not say when she and her bae went to the Maldives, but she did say in another video on her Instagram stories that the trip was a surprise for her birthday, which was about two weeks ago.

below is the photos and videos, swipe for more…