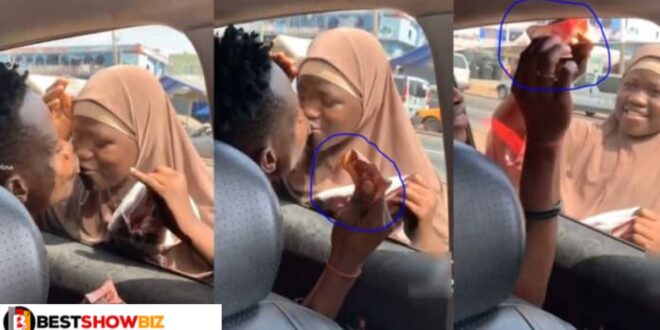 Shameless man forces a 12-year-old female street beggar to kiss him before giving her 1 cedi. (video)

In an atrocious video that has gone viral on social media, a young man is seen doing the unthinkable before extending a helping hand to a beggar on the streets.

The man seen riding in a car demonstrated that “there’s no such thing as a free lunch” – a popular adage implying that one cannot get something without giving something back.

According to the video’s account, this young man requested a kiss from a female street beggar, believed to be between the ages of 12 and 15, before giving her only GHC1.

The young girl, who appeared to be uncomfortable with the young man’s demand, had no choice but to comply in order to earn some money from her daily begging business.

Despite the fact that the car’s glass window prevented direct mouth-to-mouth contact, the young man has come under fire for having paedophilic tendencies.

Social media has been flooded with mixed reactions and condemnation in response to the video.