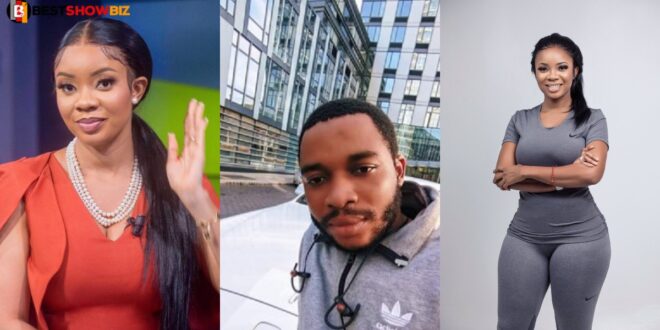 “Serwaa Amihere is not beautiful without her make-ups”- Twene Jonas

Twene Jonas, a popular Ghanaian social media blogger residing in the United States, has shifted his attacks on the government to the contentious allegations leveled against Serwaa Amihere of GhOne TV.

Serwaa Amihere was the subject of much debate in Ghana just a few days ago after an unknown blogger allegedly released some purported nude images on Snapchat.

Serwaa Amihere has been giving her nudes to politicians and sleeping around with some high-profile people for money, according to the yet-to-be-identified blogger. As if that wasn’t enough, the blogger went on to reveal that the amazing Serwaa had been laying down with her friends’ boyfriend.

Many expected Serwaa Amihere to be depressed as a result of the rumors, but she appears to be having a good time as she goes about her daily routine.

Twene Jonas, in response to the entire incident, stated that Serwaa Amihere isn’t nearly as attractive as many people believe, claiming that she looks terrible without her cosmetics. All things considered, it’s evident that Twene Jonas will say anything to make himself stand out enough for his dubious remarks to be noticed.