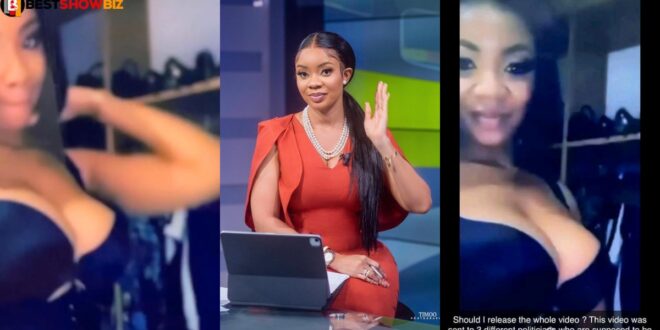 Serwaa Amihere, the GHOne award-winning Ghanaian media personality, news anchor, show host, and producer, has fallen in hot water as a result of an aggressive expose launched against her by an anonymous Snapchat user.

Serwaa Amihere is a big-time prostitute who has cloaked her prostitution business with media work, according to a series of posts seen on Bombshelli’s Snapchat stories.

Serwaa Amihere, according to Bombshelli, has been providing [email protected] recordings of herself to some of the country’s leading lawmakers in order to fund her opulent lifestyle.

Serwaa was still undressing to reveal her whole flesh to her funders in a screenshot Bomshelli took from one of the [email protected] movies Serwaa sent to three of her sugar daddies, all of whom are well-known politicians.

Bombshelli also threatened to post the entire video after only uploading two seconds of it.

Serwaa can be seen barely [email protected] during a video whatsapp call with an alleged NPP Chiefscribe in the screenshot below, which was taken from Bombshelli’s page.

Bomshelii has told his supporters that he would reveal more Serwaa dirty secrets, so stay tuned…