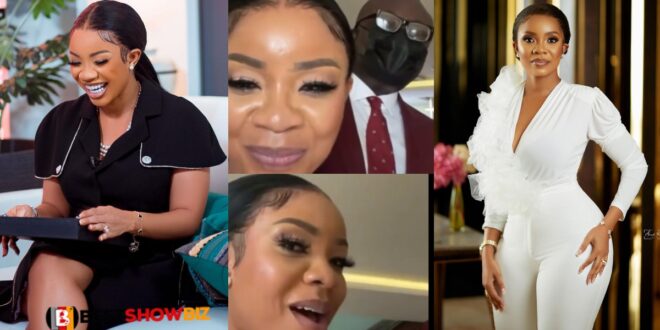 Serwaa Amihere as we reported earlier, became a social media sensation over the weekend after a Snapchat account called Bombsheli made many claims against her.

Serwaa allegedly had several relationships with important men in Ghana, including John Boadu and other NPP leaders, according to a Snapchat account that has since been deleted.

Many people anticipated Serwaa would respond or deny the claims, but she has remained silent.

Well, the beautiful newscaster has finally gone live on Instagram and people think she is going to address her issues.

Despite the fact that she went live unannounced, she gained over a thousand followers in the first few minutes.

Serwaa, who was preparing for a get-together with her boss, Bola Ray; Nana Aba Anamoah; and other GHOne TV employees, was shocked by the numbers.

In the live video, Serwaa was heard telling Bola Ray that people are racing to join her live stream because they assumed she was going to address the recent concerns.

“Plenty people have come thinking I have something to say [about the saga] but I have nothing to say,” she said amid laughter.”