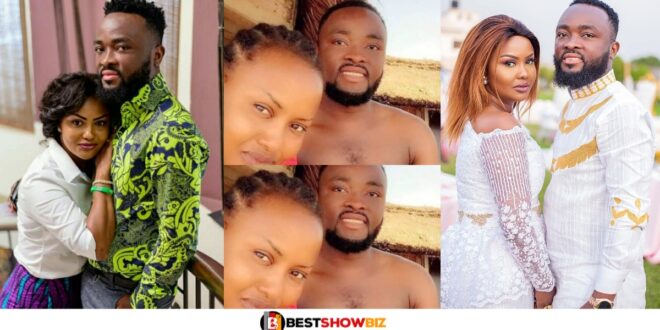 Nana Ama McBrown, a veteran Ghanaian actress, and her husband, Maxwell Mensah, were spotted in a disputed photo.

A shirtless photo of Mcbrown’s hubby has surfaced, generating quite a controversy.

In a recent snapshot, the 43-year-old actress and her young husband can be seen bonding as a pair. They appear to have taken a romantic break from their hectic routines.

The photo has recently surfaced and is spreading for obvious reasons – Maxwell is shown shirtless.

It appears that social media users are not used to such intimate images; perhaps Prophet Nigel Gaisie’s naked selfie with his so-called niece has awoken their subconscious mind to the fact that everything about such photos is improper.

Read Also  Koo Fori's daughter, Asantewaa reveals how her mother died when she was just 10-years

Meanwhile, Nana Ama McBrown and her husband recently stole the spotlight at one of their mutual friends’ birthday parties.

McBrown entered the dancing to do what he does best at all events, and her hubby, too, blessed the occasion with his adorable presence.

Take a look at the contentious image below.