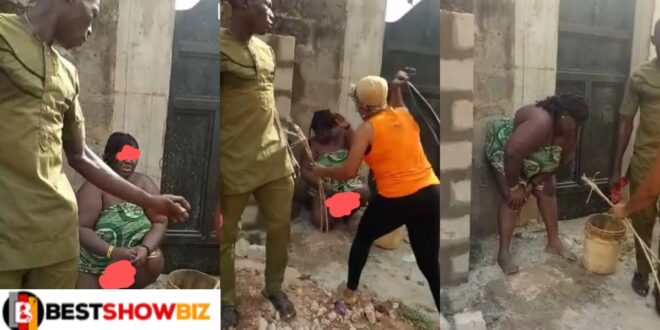 It is unfortunate for a married person to have an affair with someone who is not his or her spouse because it can result in public humiliation if caught, as we have seen in many cases in the past.

A married woman was caught having an affair with her sister’s husband by another woman. The woman in question is married and left her husband’s home to have an affair with someone else’s husband.

This shocking incident occurred in Muranga, Kenya. The woman who had apprehended her did not hesitate to summon other neighbors to see what the man and woman were up to.

The woman decided to parade the cheating wife around the neighborhood naked, chasing and flogging her with a cane until others came out to plead for her.

The woman did not stop beating her, even pouring hot water on her body in order to beat her to her heart’s content. It was a heinous act. The cheating wife had no choice but to begin pleading for mercy, but all of her cries were ignored.

Read Also  Photos and Videos: Check out the top 4 expensive and lavish wedding that happened in Ghana
Share