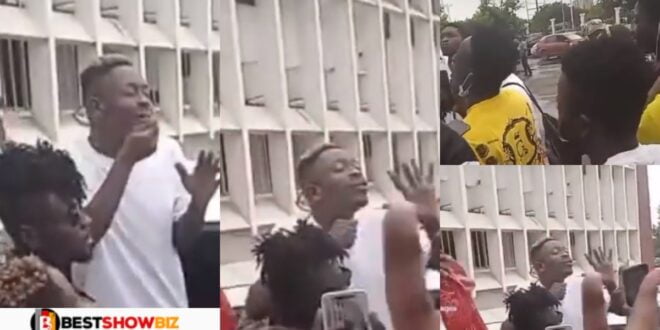 Shatta Wale was swamped and showered with affection by his adoring fans, who had been waiting for their King to be set free from the clutches of the law.

Today, an Accra Circuit Court awarded Shatta Wale and his two accomplices, Deportee and Gangee, a GH100,000 bond with two sureties each.

Following that, his followers flocked to meet him, expressing how they felt throughout his absence and how grateful they are to have him back.

Shatta Wale answered with a smile on his face as he hopped into his car to drive away. The crowd expanded in size as they greeted him, yelled his name, and showered him with congratulations.

Read Also  "I don't care if my husband cheats, I only pray for my marriage to be safe"- Mercy Aseidu

The show of excitement revealed a lot about the Shatta Movement’s formidable nature. Fans also advocated for the creation of a law known as “Shatta Law,” which would prohibit pastors, prophets, and others from publicly prophesying doom for celebrities, public figures, and renowned individuals.

Shatta Wale and his two accomplices are scheduled to appear in court again on November 9.

View the video below: