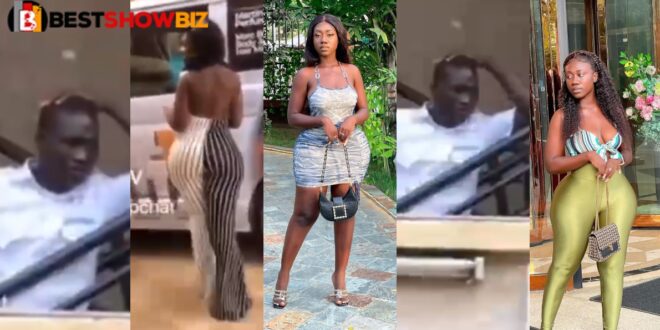 Hajia Bintu, an Instagram celebrity, Tik Tok content creator, and brand influencer, almost cost a security guard his job when she grabbed all of his attention and forced him to leave his station in order to stare at her soft, huge buttocks during a recent outing.

It was recently announced that the curvy influencer has been handed an ambassadorial contract by fragrance company GISELLE. The curvy celebrity rose to notoriety on the internet by periodically flaunting her endowments on social media.

Hajia Bintu also paid a visit to the offices of her clients to sign the contract in the presence of witnesses and bloggers as a final step in finalizing their commercial relationship.

This was the second time that Bintu wore a figure-hugging jumpsuit in black and white, this time to showcase her well-endowed backside. Bintu is known for wearing tight-fitting clothes to accentuate her curves.

Following the completion of the transaction, Hajia was compelled to pose for photographs in the open for the purpose of posting them on social media. It was at this point that a security guard at the location lost his entire concentration and abandoned his station in order to get a peek at his one-of-a-kind opportunity.

In fact, he was taken aback by the sheer size of the loot he had just witnessed, and he was caught with his jaw-dropping.

Read Also  'The spiritual, physical, and emotional attack is too much, I'm fed up' - Funny Face
Share