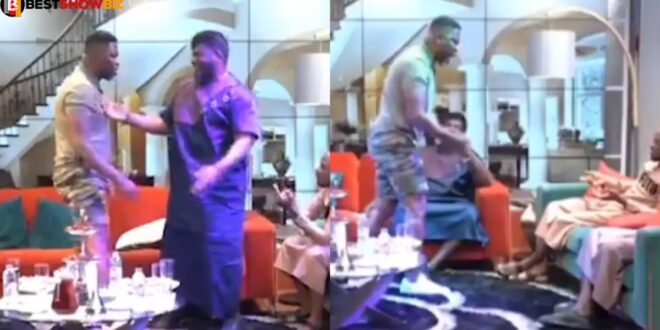 During yesterday’s episode of United Showbiz, presented by Abeiku Santana for Nana Ama Mcbrown, there was nearly a fight and an exchange of physical punches inside the UTV studios.

Nana Amma Mcbrown is out of the nation for another operation as a consequence of an accident, as we previously reported, and Okay FM’s Abeiku Santana has taken over the show.

However, he lost control of the broadcast, and A-Plus and Halifax Ansah Addo, two of the panelists, fought, almost getting violent. A-Plus, who was the most enraged, even jumped up to pounce on Halifax at one point.

On live television, the two exchanged harsh words and insults. A-Plus even uttered the ‘F word’ at one point, but he was forced to apologize in the end.

The feud began when Halifax questioned A-Plus about his absence from the much-publicized # FixTheCountry protest.

Halifax wondered whether it was because A-Plus had previously said that he was uninterested in the demonstration, which he referred to as a “jogging exercise.”

This infuriated A-Plus, who began hurling insults at Halifax, to which Halifax reacted in kind.

Below is a video of what happened.