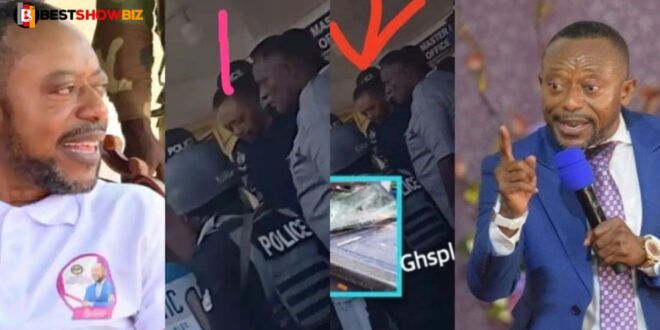 See the Video of how police arrested Rev. Owusu Bempah and his boys

According to reports, Apostle Isaac Owusu Bempah, the founder and head of Glorious Word Power Ministries International, has been arrested.

According to sources, Owusu Bempah was detained on Sunday, September 12, 2021, at his Odorkor church grounds.

As per a Facebook post by Listowel Nana Kusi-Poku, Owusu Bempah was arrested in connection with an attack on several police officers.

The police officers are alleged to have attempted to arrest Owusu Bempah but were stopped by church members and vigilantes who attacked them.

A video of the man of God’ in the middle of police officers has also surfaced. According to the video, he was transferred to the Dansoman Divisional Police Command.

It is uncertain what prompted the police to want to arrest Owusu Bempah, although it is widely assumed that it was related to his feud with Nana Agradaa.

watch the videos below; swipe for more…