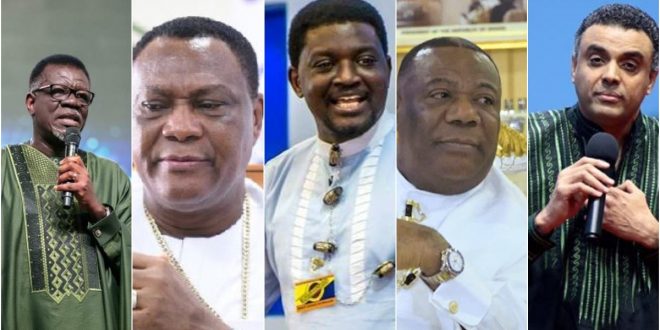 Raising a church has been classified as late to be one of the profitable assets as it requires less or now input capital but yet yield more income at the end of every week.

It would have been a shock if pastors were ranked when classifying riches people in the world, many of them would make the list. Many of them started modestly but have now bee blessed bountifully by God but that can not be said about all.

speaking of richest pastors in Africa, it is the names of Nigerian pastors that are often mentioned. They include Davido Oyedepo of Winners’ Chapel, TB Joshua of Synagogue, EA Adeboye of the Redeemed Church, Chris Oyakhilome of Christ Embassy.

today we take a look at pastors in Ghana, who are indeed rich but mostly show less to the public.

Read Also  Ayisha Modi flaunts dollars, says it's her payment for running errands for Rev Obofour and his wife.

Mensah Otabil is the founder of the International Central Gospel Church (ICGC). he first foundered this denomination in the year 1984 and has been able to raise success over the years. He was born on 31 August 1959 to Dinah and Lloyd Otabil who lived on Asafo Street in Sekondi-Takoradi, in the Western Region of Ghana.

the International Central Gospel Church has a network of local assemblies in Ghana, Europe, the United States, Canada, and other parts of Africa.

He is the general overseer of the Christian Action Faith Ministries, with over 100 affiliate and branch churches in North America, Europe, Asia and Africa.

He is also the Founder and President of Prayer Summit International. the Archbishop was named by the New African Magazine one of “The 100 Most Influential Africans”

Nicholas Duncan-Williams became the first non-American to lead the prayer for the incoming President and Vice President of the United States during the inauguration.

The founder of the Perez Chapel International presides over about 300 churches locally and internationally. His church’s headquarters, the Perez Dome, is said to be the biggest church auditorium in Accra, with the capacity to accommodate 10,000 people.

He is the founder of Precious TV, Chancellor of the Perez University College, and author of several books on Christianity. Agyinasare was ordained as a missionary by Enoch Agbodzo In 1986

He is the founder and presiding Bishop of the United Denomination Originating from the Lighthouse Group Of Churches which was founded in 1988 and is now available in over 50 countries.

The founder of the Royal House Chapel international is a worthy member of this list of the richest pastors in Ghana. His church is one of the biggest in the country and is thriving in other countries too.

At the church’s headquarters in Accra, there are three services every Sunday with over 10,000 people reportedly attending each. Reverend Ankrah owns several luxurious cars and a mansion in Accra.