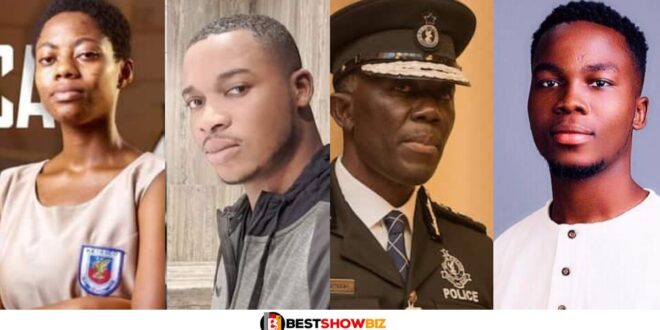 See The List Of Ghanaians Who Became Very Popular In 2021 From Nowhere (Twene Jonas, Dampare, Journalist Albert, And More)

In 2021, numerous ordinary Ghanaians became viral stars on social media for a variety of reasons.

The 18-year-old past student of Keta Senior High Technical School became a sensation online after becoming the first female student in eight years to reach the final stage of the National Science and Maths Quiz competition.

George Akuffo Dampare is a Ghanaian chartered accountant and a police officer who was appointed as the Inspector General of Police of the Ghana Police Service by President Nana Akufo-Addo.

After taking over from James Oppong-Boanuh who had been serving since October 2019, the new IGP’s numerous exploits have made him not only famous but also popular. His diligence has endeared him to the hearts of many Ghanaians.

Jonas is a young man who was born and bred in Ghana but tried fruitlessly to get the attention of Ghanaians through comedy skits and social media comments. However, he traveled to the United States and started making videos for Ghanaians about life abroad.

He has gotten several thousand of followers since then

Mohammed Ismail Sherif also known as Blacko, Kweku Frimpong has been producing music for a few years now but he never really gained any traction. However, the young artiste decided to release his first and second ‘sermons’ in 2021.

Much like Black Sherif, Yaw Tog who graduated from senior high school in 2021, rose to fame after releasing some titles that took the country by storm. Nobody saw this coming.

The young man also called Bongo Ideas became popular after a video of his audition to become the next TV star on GHOne was shared on social media. Journalist Albert’s following increased from a few thousand to nearly 20,000 within a few days on Twitter.

Many Ghanaians on social media woke up on the morning of July 30, 2021, to a trend on Twitter concerning a young boy named Oswald, who wrote a letter demanding lots of items for his ‘Our Day’ celebration at school.