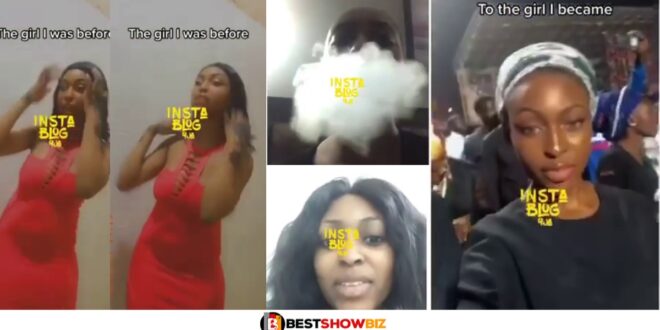 A former slay queen who is now a born-again Christian has brought glory to God by posting images of her new self after making the transition from being prominent slay queen to a Christian.

She posted a video in which she compared the time she spent in the “world,” during which she engaged in wild parties, smoked cigarettes, and apparently had sexual encounters with every person who came her way, to the life she leads now as a Christian.

We found out that some Christians approached her and urged her to make positive changes in her life, which she did after initially showing a great deal of resistance to the idea.

Read Also  New Video: Man Takes wig, phone, and slippers he bought for his girlfriend after seeing her on a date with another man

The woman captioned the video that she shared on social media.

”The girl I was before, to the girl I became.”