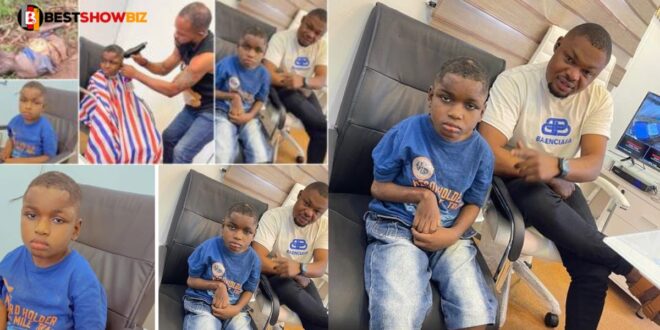 After being saved by a nice man named Harrison Gwamnishu, a youngster was granted a second chance at life.

The youngster was put into a forest somewhere in Edo with his wrists tied, according to the activist who published the news and was discovered on June 24th.

Harrison thanked the kind-hearted people who had donated to the cause by sharing images of the handsome lad’s changed appearance.

Harrison Gwamnishu, a guy, came to the aid of a small kid who had been dumped into the woods.

On the 24th of June, the activist discovered the boy in a forest in Edo state and took him to a medical institution, where he was treated for two months.

The youngster was admitted to the hospital and treated for two months.

Harrison further revealed that the youngster was sent from an Edo state hospital to Asaba for rehabilitation.

The activist posted images of the boy’s new look, as well as photos of him before he was rescued, to his Instagram page.

He went on to thank all of the good-hearted people who have donated to the boy’s cause.

“God will never forsake or leave you, you’re a timely blessing to this generation this is so emotional “

“@harrison_gwamnishu u re such an amazing young man paying it forward for ur generation yet unborn, I am praying for u night n day for evil ll never near u❤️”

“God continue blessing you dear,you are Angel in human form,You will reap your labour in good health Amen”

“Your type is rare nomatter what, I know you are kind naturally. If you continue this way, you shall soon be oir nation’s saviour from leadership lapses.”

“It’s a good thing your mum adopted him. He looks more like you with each passing day. More blessings.”