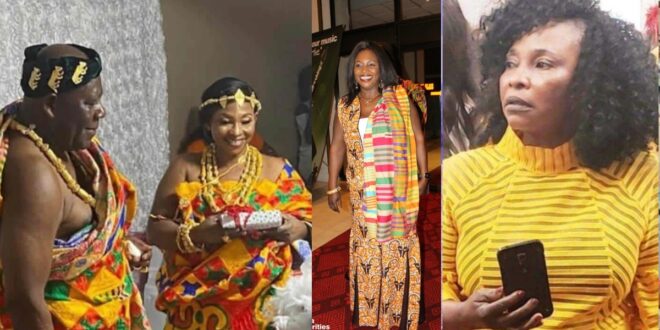 see pictures of Kyeiwaa, her husband and car.

Rose Akua Attaa Mensah (Kyeiwaa) is a Ghanaian actress best known for her performance in the movie Kyeiwaa. She began her career as a lead singer in the African Brothers ensemble, which was led by Nana Kwame Ampadu.

She then went on to star in the Akan Drama TV series. Nana Bosomprah welcomed her to the Cantata TV Drama.

Rose Akua was first married to Daniel Osei, a Kumasi-based spare parts dealer. They had only been dating for about a day before they decided to perform a traditional Ghanaian wedding ceremony in Brofoyeduru. friends and family members witnessed the service. Mercy Asiedu, Vivian Jill, Papa Kumasi, Matilda Asare, big Akwes, and other celebrities were among those who attended the ceremony.

A few hours after the wedding, Florence Kyei called one of Ghana’s contact stations, and said she has been married to the groom up to 20 years. The arguments were accompanied by a series of twists and turns that rendered the marriage null and void.

Kyeiwaa recently remarried in the united states and is living her best possible life.

see pictures of her wealth below.