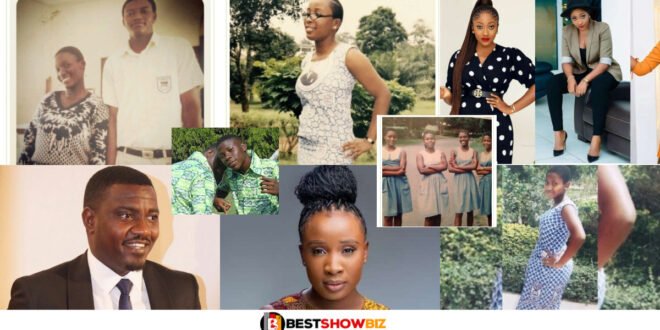 Today’s societies are very interested in how children develop. Beginning with the Swiss clinician Jean Piaget, 20th-century brain research pioneered a method of dealing with child development that meticulously identified and labeled each major stage a typical newborn child may go thru on the formative journey of its most crucial years.

Below are some great flashback images of these celebs in their secondary school years, and we hope they inspire you to work harder in life.

Emmanuel Andrews Sammini, also known as Samini, is a Ghanaian Reggae and Dancehall recording artist from Wa, Ghana. His music is a harmonic blend of high life, dance hall, reggae, and hip hop. He refers to his music as “African dance hall.”

Emmanuel Andrew Sammini, better known as Samini in the entertainment industry, is a well-known Ghanaian Reggae and Dancehall performer.

Samini is one of the country’s best African dancehall musicians. The Date Man, as he is also called on his social media handles, rose to prominence after releasing his debut single album,’ Linda,’ and thereafter featured on more popular singles.

Samini has a long list of honors to his name. Most Ghanaians adore him for his intensity on stage and the way he performs his music. How do you imagine Samini dressed in his school uniform?

Meet John Dumelo, one of the greatest performers in Ghana and abroad.

He is interested in farming and politics, in addition to performing.

Many people look up to him and respect what he accomplishes.

He was the first Ghanaian to reach a million Facebook likes.

John has appeared in a number of films, including 4Play and Adams Apple. He has a long list of honors to his name.

A flashback snapshot of the actor in his school uniform with an unknown lady is seen below.

John Dumelo is a Ghanaian politician, farmer, and actor. On April 1, 2014, he became the first Ghanaian to reach a million Facebook likes.

Mr. John Dumelo, a Civil Engineer, and Mrs. Antoinette Dumelo, a Customs Officer, are his parents.

She has appeared in a number of films, including The Perfect Picture.

She has received several honors, including the African Movies Academy’s award for best actress in 2010.

Naa Ashorkor is a screen goddess, and many people like her work.

Take a look at this flashback snapshot of Naa Ashorkor in her school outfit.

She is well recognized for her roles in Shirley Frimpong- Manso’s “The Perfect Picture” and Iroko TV’s Poisoned Bait, both directed by Leila Djansi.

Anita Akua Akuffo is a Ghanaian television personality who works for TV3.

She presents one of TV3’s most popular series, Date Rush. She uploaded a photo of herself dressed in her school outfits. See the image below;

Anita Akua Akuffo was born on June 2, 1993, in Accra, Ghana, in the Greater Accra Region.

Stonebwoy is the CEO of Burniton Music Group.

Livingstone Este Satekla, best known as Stonebwoy in the entertainment industry, is a Ghanaian Afropop, dancehall, and reggae singer.

He is the owner of the Burniton music group. At the BET 2015 Ghana Music Awards, he was named Best International Act in the African category.

When it comes to the dancing halls in Ghana, he is unrivaled.

Scroll down to see the viral flashback photo of Stonebwoy in his school outfit.

He is the President and CEO of Burniton Music Group.

Lydia Forson is a sixth-grader. A Ghanaian Producer And Actress

Lydia Forson is an actress, writer, and producer from Ghana.

She rose to prominence after appearing in St. James in 2005.

Forson’s acting career began with cameo appearances in Hotel St. James (2005), Run Baby Run (2006), Different Shades of Blue (2007), and a spell on the Nigerian reality show The Next Movie Star (2007). Shirley Frimpong Manso, CEO of Sparrow Productions, who previously collaborated with Forson on the Ghanaian television series Different Shades of Blue, brought Forson back to the big screen with the film Scorned.

As a result of this major performance, she received her first African Movie Academy Awards (AMAA) nomination for Best Upcoming Female Actress.

In 2009, Forson featured in Shirley Frimpong-award-winning Manso’s film The Perfect Picture. She has appeared in several films, including A Sting in a Tale, Phone Swap, Masquerades, Keteke, and Sidechic Gang.