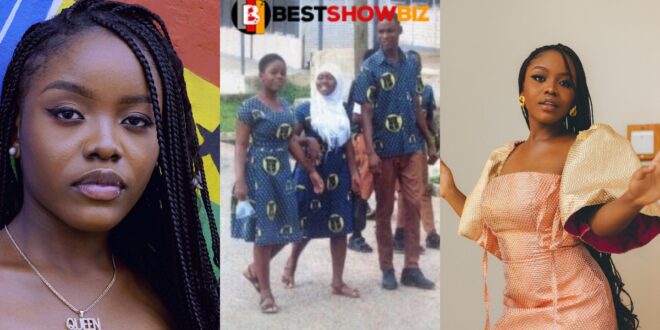 See old photo of Gyakie when she was at T. I Ahmadiyya Senior high school.

Gyakie’s story is one of the most anonymous accounts of a meteoric rise to fame. Nana Acheampong, whose real name is Jackline Acheampong, is a historical figure and one of Africa’s most well-known artists.

Her song “forever” for which she collaborated with Nigerian Oma Lay on a remix, has amassed millions of views on YouTube and other digital music platforms. Her standing as a star across the continent has just been reinforced with this song.

She dropped “hin” less than 24 hours ago, and it took fire quickly.
Well, a photo circulating on the internet is a flashback photo from her senior high school days at Kumase TI Ahmadiyya.

Gyakie is only 22 years old, and she just graduated from senior high school two or three years ago, thus the portrait has not aged much.

She is presently a student at Kwame Nkrumah University of Science and Technology, where she is majoring in international business.

What a promising future the little champion is building for herself.