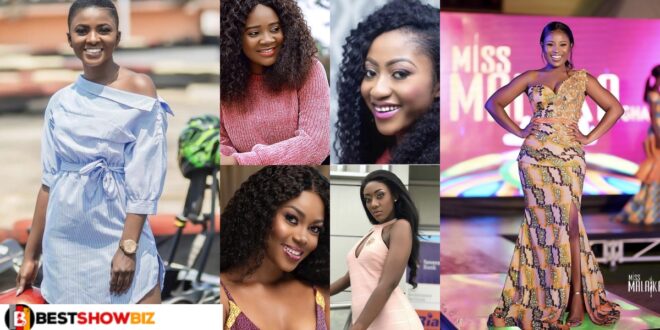 In this article, I’ll provide you with a list of your favorite Ghanaian female celebrities who have competed in beauty pageants, as well as a brief profile of each.

Anita Akua Akuffo, a Ghanaian television personality, was born on June 3, 1993, in Accra.

She went to the Ghana Institute of Journalism, where she studied communication studies and journalism with a concentration on journalism practice.

She is a model as well as a television presenter for TV3, where she works. She competed in MISS ECOWAS 2012 and finished as the second runner-up in the competition.

She also competed in the Miss Malaika 2014 pageant, where she advanced to the finals.

Yvonne Nelson is a Ghanaian actress who was born on November 12, 1985.

She is also a model, a film producer, and a businesswoman in addition to her acting career.

She received her undergraduate education at Zenith University College and went on to study Human Resources Management at the Central University.

She competed in the Miss Ghana Pageant in 2005 but was unsuccessful in her bid for the title.

In addition to being an actor, Regina Van Helvert is also a radio and television host.

Born on August 6, 1991, she was the youngest of three children. The GHOnes Rythmz entertainment show and Touchdown on Live FM are both hosted by her at the time of this writing.

Read Also  6 ladies storm the wedding of a man they are all dating to cause confusion.

She competed in the Miss Malaika 2012 pageant and finished as the second runner-up in the competition.

Kalsoume Sinare is a Ghanaian actress who has starred in more than fifty films throughout her career.

Following graduation from Accra High School, she went on to pursue a career in the entertainment sector. In 1990, she competed in the “Miss Model of the World” pageant, where she represented Ghana.

Kafui Danku is a Ghanaian actress and film producer who was born in Accra. She received her secondary education at Ola Girls Secondary School in the Volta region of Ghana, and she went on to study at the University of Ghana.

The Miss “Greater Accra” beauty pageant was held in 2004 and she competed in it.

Deborah Vanessa Owusu-Bonsu is a Ghanaian musician, model, academic, and television personality who hails from the Ashanti region of the country.

She was born on the 25th of August in the year 1984. She received her undergraduate and graduate degrees from Wesley Girls Senior High School, Kwame Nkrumah University of Science and Technology, and the University of Arts in London, respectively.

She finished as the first runner-up in the Miss Malaika beauty pageant in 2005, where she competed against other women.

Berla Mundi, a Ghanaian television show host, was born on April 1, 1988, in Accra.

She went to Achimota School before continuing her education at the University of Ghana, where she majored in languages and psychological studies.

She competed in the Miss Malaika 2010 beauty pageant, where she placed as the Second Runner-Up in the competition.

Pricilla Agyeman is a Ghanaian actress and model who is well known in the entertainment business for her role as Ahoufe Patrie.

She received her bachelor’s degree from the National Film and Television Institute. When she competed in the Miss Malaika Beauty Pageant in 2011, she made it to the top ten finalist list.