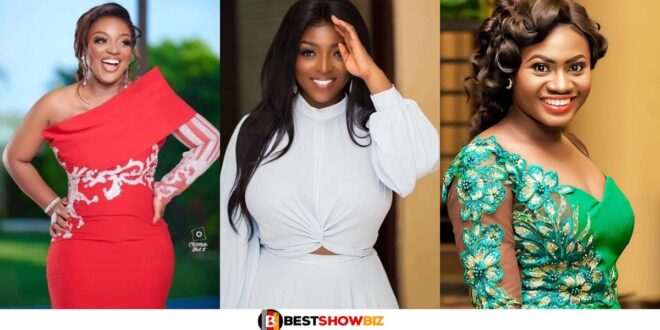 See List Of 5 Actresses Who Are Still Single In Their 30s; Number 3 Will Shock You

The majority of Ghanaian female celebrities have decided to remain unmarried for personal reasons. According to some online users, these celebrities make men hesitant to approach them.

Even if it takes a long time, some people assume that these celebrities are too high-class to settle for any guy.

Meanwhile, most of these celebrities when speaking about their personal life reveal that they are very happy [being single] and are not moved by societal pressure to get married.

Therefore, for single men and women in need of encouragement, Bestshowbiz has compiled a list of five A-listers who have stated they are living their best single lives.

Jackie Appiah was born in Canada and is an actor and model. She is the youngest of five siblings. She was born in Toronto and is a Ghanaian Canadian. She is one of the few Ghanaian actresses who aren’t frequently in the headlines for the wrong reasons.

however, her fans are anxious about when she will be married, though. She has a child and, in reality, takes care of him all by herself.

Born in the United States to a Ghanaian mother and a Nigerian father. Yvonne Okoro is of mixed ancestry and self-identifies as an African. She has always wanted to be an actress since she was a child.

The actress is one of many celebrities in the country who are single.

She has appeared in films from both Ghallywood and Kumawood, including ” Mirror Girl, ” ” Azonto Ghost, ” and ” April Fool. Benedicta is also one of the rare spinster actresses on our list.

She is a stunning woman who frequently dazzles her fans with stunning and stylish photographs. She’s also unmarried, which has her supporters wondering why their gorgeous empress hasn’t married yet.

Zynnell Zuh is a well-known philanthropist, producer, and actress. Because she is one of the rare actors who has never been married, Zynnell belongs on our list of celebrity spinsters.

Her admirers are curious as to when their favorite celebrity will tie the knot. In her acting career, she has accomplished a lot. Glitz Style Awards, Golden Movie Awards, and a slew of others have been bestowed upon her.

Ankomah was born in Accra, Ghana, as the first child of her single mother. Ankomah is a businesswoman and actress who has a slew of sponsorship deals. She is one of the rare celebs that wear modest clothing and enjoys discussing religion in her interviews. She is also one of Ghana’s many spinsters at the moment.