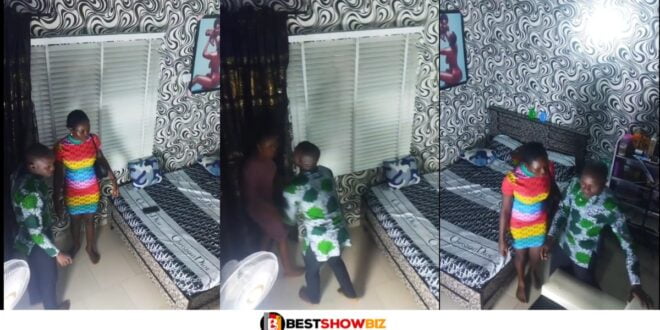 A man, probably between the ages of 30 and 35, was caught on camera hiding his side chick from his wife, and many social media users couldn’t stop talking about it after seeing it.

If you look closely at the video, you’ll notice that the man and his side chick were having fun in a room when they heard a knock on the door.

When the man looked through the window, he saw it was his wife. The man advised his wife to give him a minute because he was in the restroom.

The video shows her asking her husband why he locked himself in the room. Because the room was a single room with a toilet and a bath, the man had no idea where to hide his side chick.

He initially told the side chick to hide at the back of the door, but he soon realized that his wife would easily notice her if she decided to check the room. This man then grabbed an empty large bag and instructed the side chick to hide inside. He stowed this massive bag in the back of his stoffen chair. The man then opened the door to let his wife in.

When the wife came in, she asked the husband why he was so uncomfortable, but he said he was fine. The wife stated that she had forgotten her cell phone and had decided to return for it. She left after the man quickly searched for her phone. The man then went to the back of his stoffen chair, opened the back, and summoned his side chick.

In the video, the side chick is overheard saying, “So you married and didn’t tell me? You’re such a waste of time. Please do not call my mobile number again “. The man went down on his knees to beg the side chick to let them continue their romance, but the lady pushed him away and exited the room.

Cheating appears to be a part of most men, according to some social media users who saw this video. No matter how well their wives treat them, they will cheat.