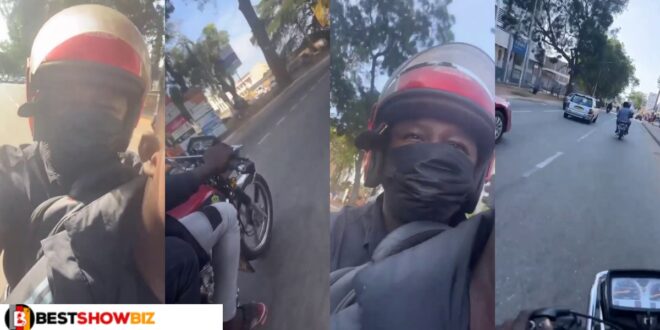 Samuel Frimpong, also known as Medikal, a Ghanaian rap artist, was scheduled to return to court today to continue his trial following his alleged brandishing of a weapon in a video posted on social media.

The rapper, who obviously wants to prove to the court that he is following what he was probably told, was spotted in a video this morning sitting on a commercial motorcycle to avoid arriving late for his next court hearing.

To arrive on time for his hearing, Medikal left all of his big vehicles at home and hired the services of an okada to avoid the city’s heavy traffic.

Medikal was remanded into prison custody for 5 days on October 22, 2021 by an Accra circuit court judge.

Later, he was granted bail in the sum of GH100,000 with one surety. Medikal has pleaded not guilty to the charge of displaying arms and ammunition.