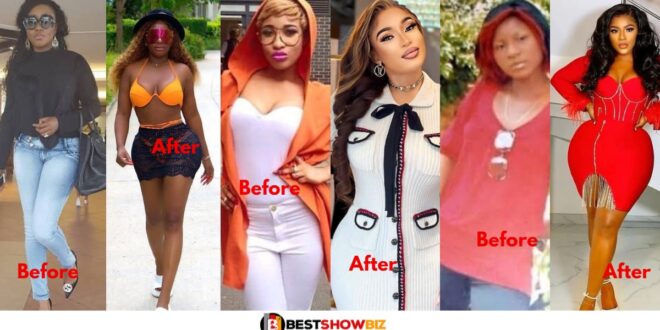 The Brazilian Butt Lift is a cosmetic surgery technique that involves the transfer of fat to the buttocks. A great number of famous celebs have opted to improve their appearance by undergoing a procedure known as a Brazilian butt lift.

We show you the top 8 female Nigerian celebrities with large booties, boobs, and an hourglass figure thanks to BBL.

Some of the stars on this list have come out and admitted to undergoing plastic surgery to achieve their stunning appearance, while the claims made about the others are merely hearsay that is probably not too far from the truth given the subjects’ previous public appearances.

Ini Edo is widely regarded as one of the best Nollywood actresses Nigeria has ever produced. Many people love the stunning actress for her distinct acting style.

She began her cinematic career in 2000 and is one of the Nigerian celebrities who have boosted their physiques as a result of their social position.

She was not as voluptuous as she is now when she first appeared on the big screen. She had a normal, thin body type until recently, when she may have had plastic surgery to make her look more curvy. The photographs below show the transformation.

Tonto Charity Dikeh is also named as one of many female celebrities who have had bodily changes to appear more beautiful and enticing.

The actress has never disputed having surgery. With her heart on her sleeve, the beauty influencer never failed to keep the world updated on her physical transformation journey.

Destiny Etiko has joined the ranks of celebrities who have worked on their bodies. She is another well-known face in Nollywood films.

Read Also  The Bank of Ghana will soon phase out the Ghc1 and Ghc2 notes.

Destiny was also rumored to have had liposuction after outdated images of her were posted in the past.

Luchy Donald, her coworker, accused her of having liposuction after she threw a shade in her direction.

Toke Makinwa was among the first Nigerian celebrities to get plastic surgery.

The social media influencer and popular OAP, has an amazing body. She has, however, undergone popular surgical body enhancements.

In an episode of Toke Moments on YouTube, the 40-year-old media personality spoke out about her cosmetic surgery story.

The slender Toke Makinwa has revealed no regrets about her operations thus far. Toke Makinwa was married to Maje Ayida for three years until their divorce.

Okuneye Idris Olanrewaju, also known as Bobrisky, is a Nigerian cross-dresser. He had Brazilian buttlift surgery to make him look more feminine, which had been a long-held goal.

On May 30, 2021, the male Barbie doll who recently declared his plans to have feminine enhanced cosmetic surgery posted a video of what appears to be a successful Brazilian butt lift aftermath on his Instagram profile.

He posted a short video of himself writhing in pain while getting fluid drips through an IV and wearing a surgical body shaper that showed off his new female curves.

Although he said his operation was performed in the Caribbean island, background noises in the Bobrisky video suggest otherwise, leading his supporters to believe the treatment was performed in Lagos, Nigeria.

Nancy Isime, a popular socialite and fitness enthusiast, has disclosed that she obtained all of her new body parts through cosmetic surgery rather than exercise, as she would have us believe.

When old images of Nancy surfaced alongside her surgery journey, this knowledge was exposed.

Many people were shocked to hear that their favorite fitness model had taken shortcuts to achieve her curves and lovely rear, while they sweated in the gym looking for non-existent miracles.

The stunning TV host and actress has undoubtedly always had a fit physique, but she did get some work done recently.

Mercy Eke acquired the label “queen of highlights” thanks to her bum and personality. Many people joked about her derriere having its own housemate.

You’ve come to the right place if you’ve ever wondered what Mercy looked like before her surgery.

Mercy Eke, a former Big Brother Naija housemate, has denied getting surgery to improve her rear.

In a recent video circulating on social media, the BBNaija winner and entrepreneur admitted to using aphrodisiacs. So she may tell the kids this falsehood. Images do not lie.

On the BBN reality program, the light-skinned Bayelsa native is noted for her love triangle with Ozo.

The ex-housemate who had fans drooling over her backside revealed she underwent liposuction to expand her buttocks.

Nengi disclosed in an intimate talk with Ozo last October that she got the operation because she was unhappy with her large tummy.

The only regret the reality TV finalist has is that she did not blog about her medical procedure. Nengi experienced a barrage of criticism after the news of her liposuction became public.

The former Miss Universe stated she didn’t care and even recommended ladies to change their bodies if they so desired. She went on to say that the era of stigmatizing plastic bodies was ended.