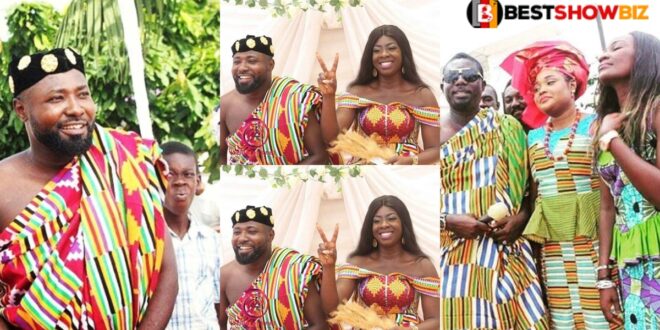 The Asante twi movie business is located in Kumasi and is widely known as Kumawood. Samuel Kwabena Darko created the business, which entertains Ghanaians with comedic films.

They have also given the country thousands of indigenous films and a slew of successful and dedicated actors and actresses. They use movies to promote our culture while also entertaining us.

In this post, I will show you some old traditional wedding photographs of Bernard Aduase Poku, one of the finest kumawood performers of all time.

Bernard Aduse Poku is another attractive performer in this film. In local films, he typically plays the character of a well-to-do spouse. He is has appeared in over a hundred films, and his on-set manner is usually impeccable. With his exceptional abilities, the actor has captured the hearts of millions. Many Ghanaians admire him for his calm demeanor. Aduse Bernard is now a happily married guy with a lovely son. We will not talk about his son right now because the spotlight is on his conventional wedding photographs from the past.

The gorgeous traditional wedding photographs of the most attractive Kumawood actor of all time are shown here.

Aduse Poku Bernard, a multi-award-winning actor, has been in the profession for a decade and has significantly impacted the Kumawood film business. Also included are the actor’s lovely traditional wedding photographs, which I am sure you like.