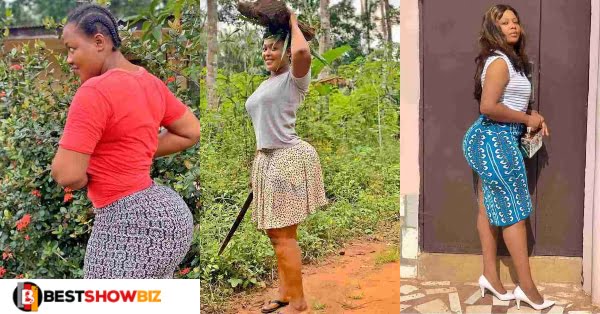 Nigerians are widely regarded as having the best African actors and actresses. Crystal Okoye, also known as Ukwu Venza, is a voluptuous Nollywood actress and Nigerian model famous for her hips and behind.

The lovely young actress was born in the year 1993. She is a Nigerian with a Bachelor’s degree in Business Administration and fluency in English.

Crystal Okoye, as she is more well known, is a skilled actress in the Nollywood film business. She specializes in rural films, and her body structure, like Destiny Etiko’s, is one of the factors propelling her forward in the film industry.

She has appeared in over 100 films, making her one of the most exciting movie prospects in the Nollywood film business. Crystal has a humorous nickname, Ukwu Venza, because of her enormous behind; she earned the moniker from her coworkers, who frequently praise her shape and attractive face.

Read Also  Victoria Lebene Busted for taking and posting a picture from Google and lying she was having her honeymoon at Greece.

Her enormous behind is one of the nicest features of her physical appearance; she is someone who does not like to wear too much make-up; she prefers to be natural, exactly like the village girl she has always been.

The young actress works tirelessly to reach her objective, and she frequently posts photos of herself on a movie set to demonstrate how dedicated she is. Crystal Okoye is fantastic at what she does, and her followers adore watching her in the village films.

It is well known that Africa is endowed with brilliant performers who are establishing a name for themselves in the entertainment industry both in Africa and abroad.

The actors and actresses each have their own area of specialization; some specialize in performing in city movies, while others specialize in acting in village movies.

They all do their best to entertain their viewers and go to great lengths to ensure that they are delighted. Sometimes, in their spare time, they share images of themselves on movie sets; it is simply for fun for them, but it seems to the viewers as a movie, and they enjoy it as well.