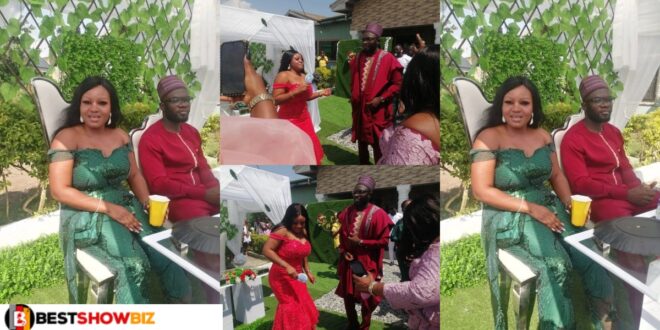 Even though many have claimed that the participants of TV3’s Date Rush are only there for the fame and have nothing to do with true love, Nana Ama, a former contestant on the love-seeking reality show Date, has found love outside of the show.

She chose to marry in a beautiful ceremony over the weekend, which was well-attended.

Photos from the plush ceremony were shared on Facebook by a page called ‘Yes I Do TV’ after the traditional wedding took place on Saturday, November 13th, 2021 at a location in Accra, and they appeared to be classy.

Giovani Caleb, the reality show’s host, was tagged in the photos on social media, and he expressed delight that the show’s tagline, “Everyone Deserves Love,” had been fulfilled.

Read Also  Why Should An Actor Be Feeding On Donations After Working For His Whole Life? – Stonebwoy

Some Date Rush participants attended the event to show their support for their friend Nana Ama.

One of the most-watched reality shows, Tv3 Date Rush, recently opened its doors for people to apply for participation in their next season, and as usual, some drama ensued.

A minor, claiming to be 13 years old, went to the audition grounds to try her luck on the adult show but was turned down.

Take a look at the photos below…