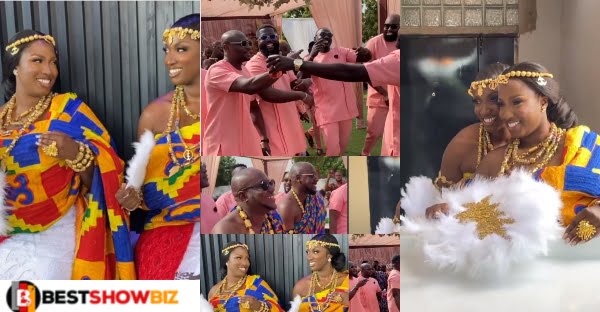 Marriage ceremonies are always lovely occasions that bring relatives together to celebrate a couple’s union.

However, one of the marriages that took place in Ghana was a three-family ceremony rather than a two-family affair.

It happened when identical sisters wanted to marry their finances on the same day in a beautiful wedding ceremony.

The wedding in Accra was a colorful affair with plenty of kente on show. Later, the twins and their attractive grooms, who also resembled each other, enjoyed a reception.

Some recordings from the twin wedding have leaked on social media and are quickly gaining popularity.

The videos were shared on Instagram by @iconicphotography, one of the ceremony’s official photographers.

Some of the videos are included below.