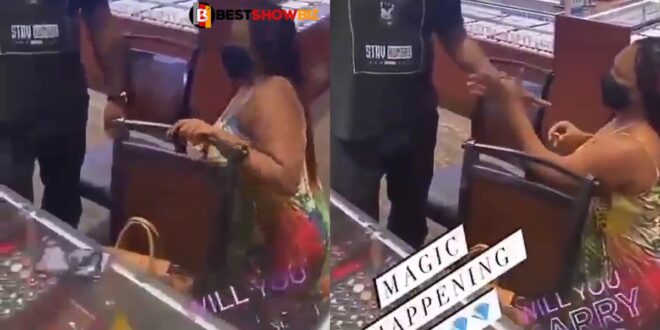 A beautiful young woman has shocked social media after publicly proposing marriage to the love of her life in a video that is quickly becoming viral.

In many parts of the world, men are expected to propose to women, and this is largely recognized as the norm. Many times, they do this by getting down on one knee and proposing to their significant other with a ring.

Apparently, in a viral video that went viral on the internet, a lady was seen going against the norm in a public proposal. The lady was seen getting down on her knees and seeking her man’s hand in marriage.

He extended his fingers in order for the proposal ritual to be accomplished in perfect harmony, accentuated by their mutual love, and the man seemed a little taken aback.

Read Also  Singer, Simi shares beautiful photos of her daughter who is one years old today

As he could be heard in the background promoting the show, it is likely that a man who witnessed the lovey-dovey moment was the hypeman for the show.
After they cemented their engagement with a kiss, the other shoppers erupted in applause.