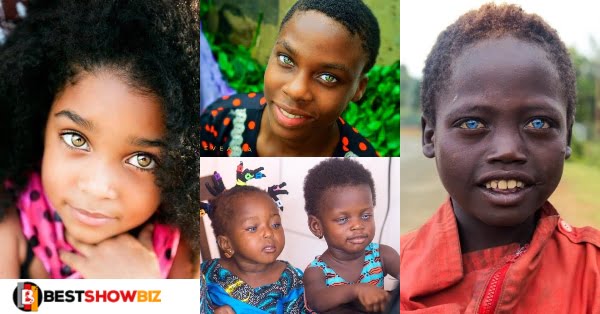 The colors of human eyes are determined by the amount of melanin in the eye and the manner in which the iris disperses light entering the eye.

The iris is a component of the human eye that consists of a thin circular structure that regulates the quantity of light that enters the eye.

Brown is the most common eye color throughout the world, accounting for an estimated 79 percent of the global population.

The majority of the 79 percent of people with brown eyes live in Africa and some parts of Asia, with the rest distributed around the world.

However, in Africa, the high concentration of melanin among Africans has accounted for the widespread appearance of dark brown eyes.

There are Africans who, due to the genetic packages obtained from both or either parent, as well as the concentration of melanin in their eye region, have eye colors that are outside of the statistical norm, making them uncommon among the African population.

But this is neither a coincidence nor a mistake, for Africa is home to the earliest known human, from whose genetic endowments all other physical human qualities have been naturally derived the world over.

Here are some examples of such unusual sightings.

The blue eye color accounts for about 10 percent of the global population with Europe retaining a great percentage of persons with such eye color.

This eye color accounts for about 2 percent of the global population. It is guaranteed by genetic inheritance, melanin concentration in the eye area, and of course, the light-scattering ability of the iris.

The grey-colored eye is one of the rarest eye color shades the world over. It tends to carry shades of green and blue within it depending on how active or otherwise the eyes may be responding to light.

This eye color is also biologically influenced by the melanin concentration in the eye.

Persons with hazel-colored eyes contribute to 5 percent of the global populace.

On occasions, this rare eye color shifts color tone from green to blue with dominant hints of the core hazel shade retained in the background, and this is due to light dispersing as well as melanin concentration abilities of the eyes.

The amber-colored eye also contributes an estimated 5 percent of persons to the global eye color population estimate. Like all other shades apart from the dominant brown, it is caused by the actions of the iris and melanin concentration within the eye region in question.