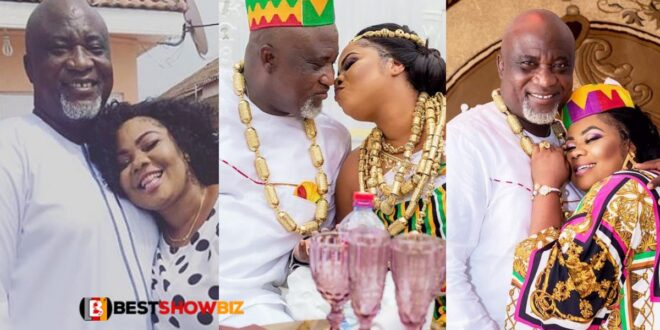 Former MP, Hopeson Adorye, the current husband of gospel singer Gifty Osei, is now involved in a spat with blogger thosecalledcelebs, which is rumored to be becoming bloody.

Hopeson Adorye has been accused of marrying a lady and then dumping her before marrying the delectable gospel musician he is currently married to.

Adorye was married to her aunt before she abandoned her, according to a social media user who messaged the blogger.

the person who is yet to be identified wrote;

“Mummy if it’s Hopeson Adorye that’s disturbing you then don’t mind him he’s a hopeless and useless man with reputation. He married my aunt and left her to search for greener pastures but never returned again to take care of his kids until he surfaced the news and headlines.

“The family went looking for him only for him to tell them that he’s no longer interested in their marriage. His wife gifty treats his child Eyra and Dzifa like maids in their own father’s house. He’s unable to talk about it but he knows it’s important to dig into other people’s lives.”

The accusation is the latest volley in a long-running battle between the two.

After viewing the post, an amused Hopeson Adorye went into the comments to respond.

He answered, “Hahaha, this country will be very interesting.”