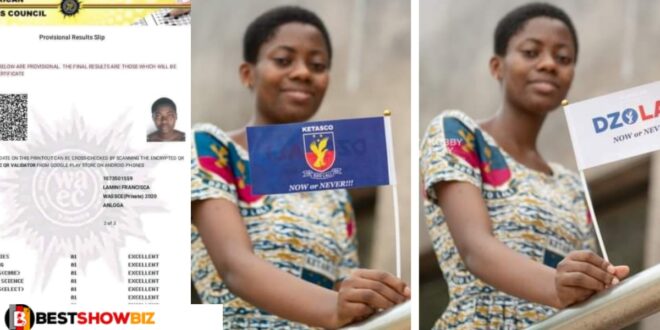 Francisca Lamini of Keta Senior High Technical School (SHTS) has been the buzz of Ghana since the conclusion of the 2021 National Science and Maths Quiz (NSMQ).

Her extraordinary display of academic tenacity during the NSMQ competition has led netizens to predict that she will go down in history as one of the country’s greatest brains among second-cycle schools.

As a result, there were no objections when she was named the competition’s overall outstanding female participant at the end.

That wasn’t her only accomplishment there. She was the only female contender to reach the finals in the contest’s last eight years. This came after her team overcame Wesley Girls High Institution, Cape Coast, probably Ghana’s greatest all-girls school, in the semi-final round.

However, many people are unaware that Francisca was already thriving academically before competing in the NSMQ.

She took the West African Senior School Certificate Examination (WASSCE) for private applicants, also known as the NOV-DEC examination, and received 8As in all subjects.

What’s more impressive is that she achieved this enviable feat while in her second year of high school, before completing the complete three-year program at her SHS. This is really wonderful.

Take a look at the results below: