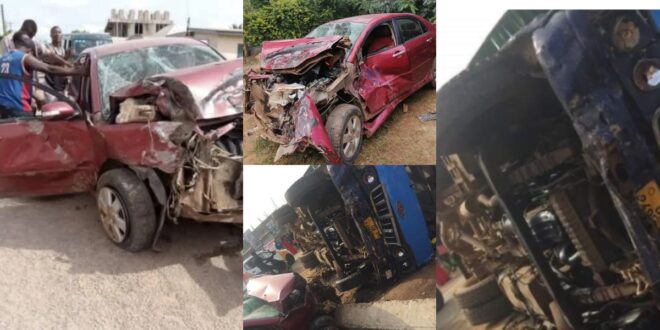 A school bus carrying 30 children to school was involved in an accident at Agona Swedru in the Central Region on Tuesday morning, according to a story released by Graphic Online.

Fortunately, no one was killed in the near-fatal crash, according to the investigation. According to the details of the crash, a KIA Combi bus belonging to the Christ the King Preparatory School in Agona Swedru collided with another vehicle with registration number GW 2495-11.

According to reports, the bus’s brakes failed, causing the crash. At the school’s junction on the Ahmadiyya hospital route, the bus collided with a Toyota Corolla Saloon car with registration number GW 2893-14 and landed on its side, heavily damaging the fence wall of the Adeyhe Assembly of the Apostolic Church Ghana.