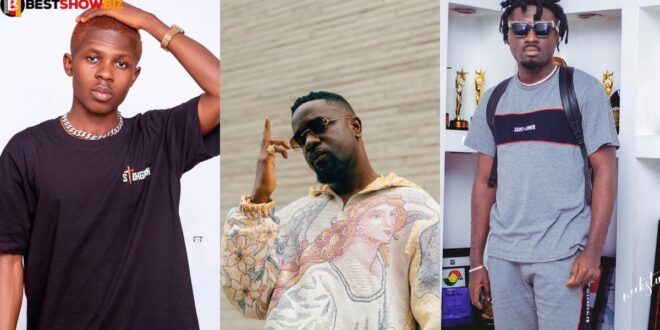 Sarkodie ditches strongman, says Amerado is the person to replace him in Ghana rap music (video)

King Sark has heaped praise on Kumerican rapper Amerado, describing him as his ideal replacement in the music industry.

In a now-viral interview, Sarkodie stated that he believes Amerado took after him in terms of rap talents.

King Sark went on to say that he is pleased with how important Amerado has become in recent years.

In the interview, the highest went to tell Tim Westwood that Amerado was one of the next rappers he impacted when he was in his prime, and that the young rapper was on his way to greatness.

During an interview with Tim Westwood in London, Amerado’s name came up, and Sarkodie was quick to praise the young rapper.

Read Also  Mr. Eventuarry, is back after disappearing, reveals where he has been (video)

In the same interview, Sarkodie commended Yaw Tog, Kofi Jamar, and the other Kumerica rappers.

Sarkodie revealed in the same interview that, despite being Ghana’s biggest rapper, he does not believe he can communicate his thoughts and emotions as well as the Kumericans on a drill rhythm, which is why he chose not to record a drill song.

‘I adore drill music and enjoy listening to it. The topics they discuss are appropriate for the genre. People pressure me to do drill music, which I am capable of doing because I rap. But I think the actual drill has a message that I enjoy but can’t articulate, “King Sark explained.