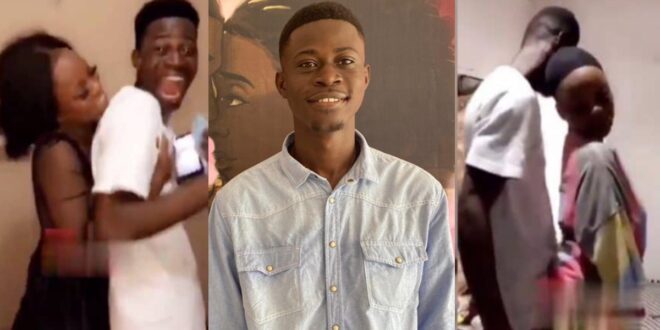 Sammy seems to have found love again after his appearance on the Date Rush show failed to land him a date.

Before his appearance on Date Rush, Sammy made headlines last year after his heart was broken by her boyfriend, Nana Ama.

A video went viral depicting Sammy sobbing profusely and shouting the word “Nana Ama” in an emotional yet hilarious moment. This was his anguished reaction to his University date’s abrupt departure, which broke his heart.

In a new video, Sammy is seen in a lovey-dovey situation with this lady who was putting the young man in the right mood. Sammy had every excuse to forget about his problems and hope that the lady would not be another “Nana Ama,” as he stroked her crotch.

Below is a video to watch: