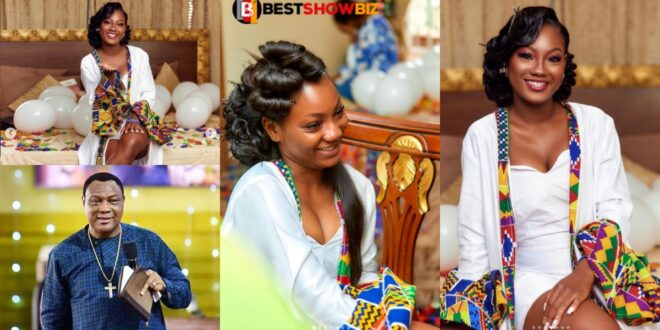 The wedding was held at the Royalhouse Chapel International headquarters in Accra, with members of Naa Dromo’s father’s church and Charles’ family in attendance.

Among the many presents Naa received, one of her friends gave her a big quantity of money.

Before handing over the check, her pals said that they had gone beyond the traditional local wedding presents and had gone overseas.

“We usually do apotoyewa , asanka [earthenware dish] and all of that, but we have gone international,” one of Naa’s female friends who led the presentation said. “So, we are not doing apotoyewa, woma [pestle] and things. Today, we have a cheque for Lady Naa Dromo Nimo. We present to her $1 million.”

When the cheque was announced, Naa Dromo and her husband jumped with joy and hit the dancefloor.

At the wedding reception, some Ghanaian celebrities were spotted.

At the ceremony, actors Prince David Osei and Peter Ritchie, as well as MC Nathaniel Attoh, were spotted. MOG Music and Joe Mettle, two gospel musicians, played at the reception.

Watch Naa Dromo’s reaction to receiving a $1 million check from her pals during her wedding celebration below.