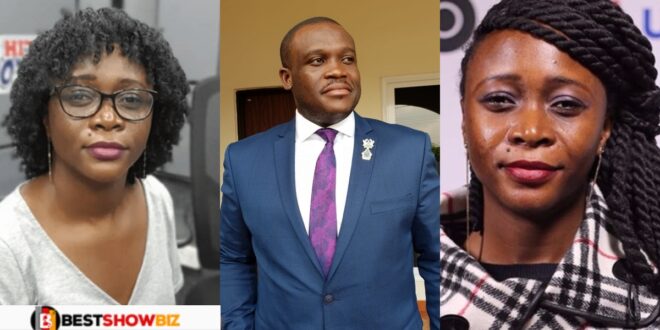 “Sam George is a dἇngệrous man, Ghanaians should stop celebrating him” – Leila Djansi

Hon. Sam George’s strong delivery in defense of his bill on CNN has prompted Leila Afua Djansi, an American and Ghanaian filmmaker, to implore Ghanaians not to praise him for spearheading the anti-LGBTQI cause.

In a Facebook post, Leila Djansi compared Sam George’s anti-LGBTQ+ bill crusade to those who believe that elderly people in Ghana are witches and should be kept to a certain camp against their will.

In her letter, however, Leila encouraged Ghanaians to denounce the Ningo Prampram MP for pursuing a cause that could endanger some citizens in the country.

“You’re celebrating him today; tomorrow, for his ego and political ambition, he’ll come after your other freedoms,” Djansi claimed in part of the post.

Read Also  Bishop Nana Sarpong Also Drops Secrets: Claims Demon Breaker Is A Liar, He Was Once A Fetish Priest And Had Sekz With His Sister - Video

She expressed her displeasure with a section of the anti-LGBTQ+ bill that she believes is cruel and should not be encouraged.

; “#Ghanaians!! Reason! @samgeorgegh is NOT a hero! He’s a dangerous man. It’s people like him that instituted the Gambaga witches camp where a mere accusation, proven or not, lands a woman in exile. You’re hailing him today, he’ll come after your other freedoms tomorrow for his ego and political ambition.

“Gambaga witches camp criminalized old age. @samgeorgegh is criminalizing sex and sexual orientation. I am a filmmaker and I have family in Ghana. So if I direct a show or film that depicts LGBTQ and I am in Ghana while it airs, and I promote it, I might end up in prison?? Gotta get my entire family outta there if that dangerous bill passes!

‘So, anyone could frame another for being gay. Your hand could accidentally brush someone’s breast or penis and you could be stoned to death. Yes. Stoned. Ghanaians burnt a military guy alive on mere accusation and stoned a woman to death also on an accusation of witchcraft.

“Sam George is a dangerous man. A true Dzata. A lion who mauls without recourse. His hunger is all that matters,”