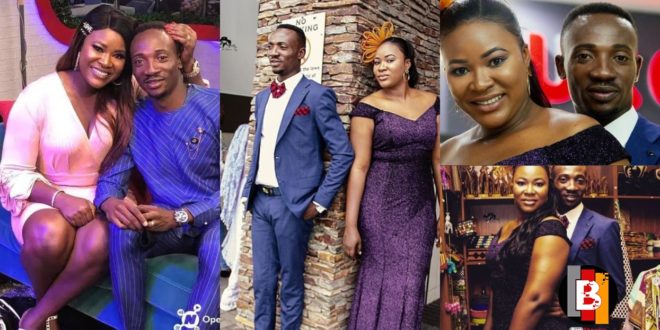 Actor Salinko, born with the name Abraham Kofi Davis is one of the well-known faces in Kumawood as he has been in the industry for almost a decade.

With all the popularity and fame the actor attained, he still managed to personal life, especially his relationship under wrap as very little is known.

However, our checks indicate Salinlo has been married to his wife, Nancy Owusu since 2017 but until their first anniversary, it was not publicly known. The couple is blessed with two kids.

Not much is known about Mrs. Nancy Owusu but from her pictures, she is one of the most beautiful celebrity wives in Ghana by all standards.

Today we have with us some lovely pictures that capture Salinko and his wife showing off the love they have for each other. We invite you to check out 10 of their photos below;

Eugene Nyarko is an entertainment and showbiz pundit, writer and freelance blogger. He is passionate about what he does and has help increase the value of entertainment contents online. Eugene is also a Java programmer, you can contact him via Email- [email protected].com