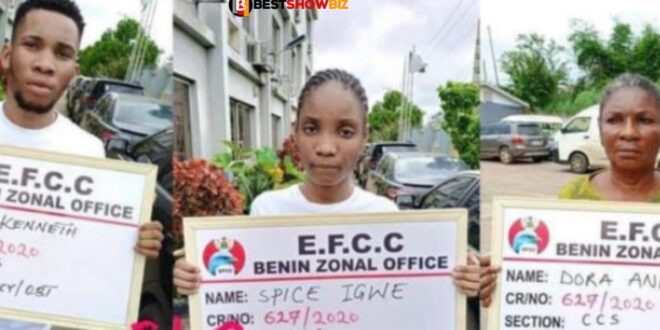 Gift Kennet, a young guy, was sentenced to prison for internet fraud.

The UNIPORT student was jailed with his mother and girlfriend for scamming Lucinda Ann Garnes Henrichson of $902,935 (about N371 million).

On Thursday, July 22, Justice F. A. Olubanjo of the Federal High Court in Asaba, Delta State, condemned him and his accomplices for online fraud.

The Economic and Financial Crimes Commission (EFCC) said in a statement that Animam and Igwe were each charged with one count of impersonation and acquiring under false pretenses.

Kenneth allegedly posed as Raymond Carl Eric and lied to Henrichson of Texas regarding an infrastructure investment proposal in 2018 and 2019.

Each of them pled guilty to the allegations and Justice Olubanjo found them guilty and sentenced them to five years in jail and N3 million fines, while Spice Chimzi Dandy Igwe was sentenced to two years in prison and a N100,000 fine.

An iPhone 11 Pro Max, an iPhone XX Max, two MacBook Pros and a double-bedroomed unfinished duplex were discovered by Kenneth in Asaba.

The victim, Henrichson, was refunded $4,255 by Kenneth’s contractor through the US Embassy.