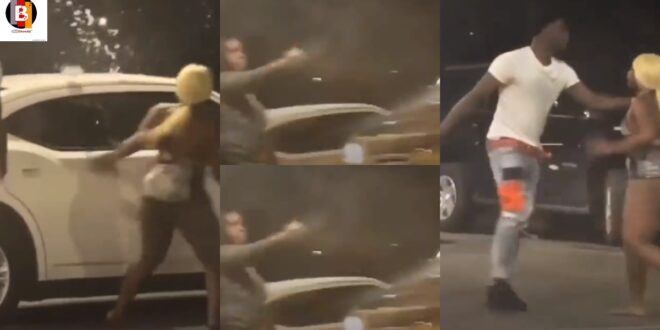 A video that shows the moment a jealous girlfriend shot to kill her boyfriend’s side chic when they met at the premises of what looked like a filling station.

A struggle broke up between two rival African American women, each of whom claimed possession of the man. One of the women smashed the side window of the man’s car with a bottle while the man tried to calm her down.

Angry with the side chic’s actions, the second lady who is alleged to be the girlfriend retrieved a gun from her luggage, and fired multiple shots at the woman after the latter threw the shattered bottle at her.

Read Also  Efia Odo takes to social media to disgrace her housegirl for stealing from her.

Netizens who chanced upon the video have wondered how on earth two women could be fighting over one man when there are lots of men out there who are willing to date them.

Like seriously she kill the lady sek ov man…. herh..