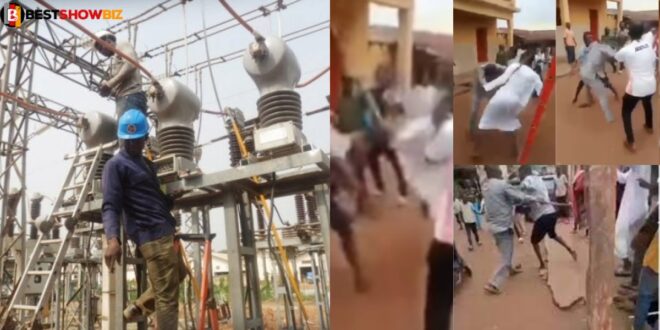 A video sighted by Bestshowbiz.com sees four brothers beating up an official of the electricity company of Ghana when he tried disconnecting their light for not paying bills.

According to reports, a small disagreement between an official from the Electricity of Ghana (ECG) and several Northern Region residents escalated into violence when the men assaulted him for removing their light.

An ECG employee named Yakubu Garkuwan Kumo, according to reports, went to the home of a retired soldier to disconnect his electricity for nonpayment of bills, but his four sons rushed him and mercilessly beat him up.

The incident, according to reports, happened on Monday, August 16, 2021 when Yakubu was on his duty giving out bills.

When he arrived at the home of a retired soldier, he asked the family to pay their bill, but they refused.

Yakubu then began mounting his ladder to cut them off from the power supply, but the soldier’s sons dragged him down and gave him some beatings.

From the video we sighted, they abused Yakubu mercilessly, as one of the boys repeatedly struck him with a stick.

watch the sad video below;