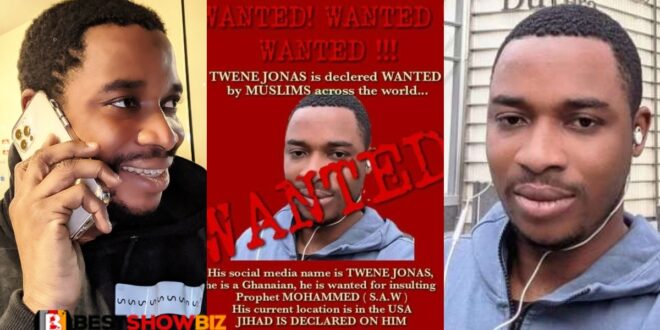 According to sources, Twene Jonas has been proclaimed wanted by Muslims all across the world, putting him in a dangerous religious fight.

Twene Jonas has committed what crime?

Twene Jonas, according to sources, insulted Prophet Mohammed and vocally berated the Islamic faith in one of his uncommon social media outbursts.

Twene Jonas’ disparaging remarks on Islam have been labeled “Haram,” and he has been ordered to atone for his remarks.

Twene Jonas was heard on the original film disputing the core of religion and stating firmly that Islam, like many other religions, is pointless.

Following that, a video circulating on social media claims that the Muslim community in Ghana is upset with Twene Jonas, believing he has tarnished the faith and Prophet Mohammed’s reputation and honor.

They have proclaimed a holy war against Twene Jonas, dubbed JIHAD, for his statements, and want to haul him before the right authorities.