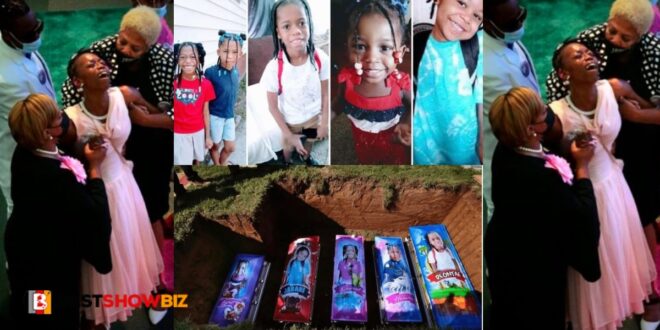 Sad news: woman loses all her 5 children on her birthday in fire accident

A 34-year-old mother of five is traumatized as she cries uncontrollably after a fire outbreak took away all of her children on same day which was her birthday.

Sabrina Dunigan, as she has been known, allegedly lost all five of her children in a fire incident on this very day which was supposed to be a memorable and happy day, just after returning from a brief trip.

Reports detailed that Sabrina left her home early on Friday morning to drop a friend off at work but returned to find her house engulfed in flames and her five children (Loyal Dunigan, 2, Jabari Johnson, 4, Heaven and Nevaeh Dunigan, 7, and Deontay Dunigan, 9,) trapped inside.

The fire is said to have began on the second floor of their apartment building in East St Louis, directly across from the Annette Harris Officer Elementary School playground.

According to the county coroner, four of the children were already dead inside the flat when the flames subsided, while the fifth kid died later in the hospital.