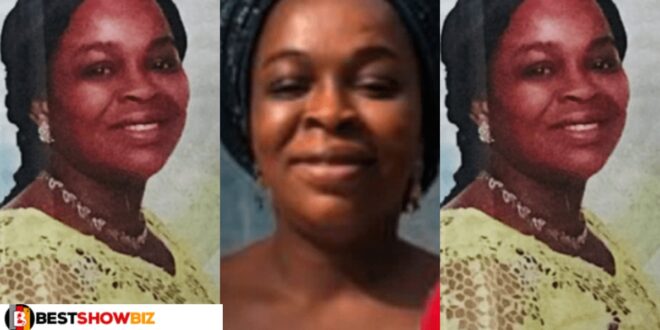 Sad News In Tarkwa: Prophetess found dḛad with her head cut off

According to a series of allegations received by bestshowbiz.com, a prophetess by the name of Mrs. Rose Boafo Ampofo was decapitated by unknown persons at Akyempim, a suburb of Tarkwa in Ghana’s Western Region.

According to reports from Tarkwa Police Command’s Divisional Crime Officer, Supt Kusi Appiah, the deceased is the founder and leader of the Word of Knowledge Church.

She was believed to have gone missing after six males were sighted speeding away from the location where she stayed, and it wasn’t until some church members came seeking for her that she was discovered.

The prophetess’ husband was supposed to have begun a search for his wife, only to be discovered dead in a pool of blood with her head severed.

Read Also  "As you can see i am not that strong"- Akuapem Poloo speaks after been released.

According to sources, the woman’s remains have been lodged at a mortuary, and an inquiry into the case has begun.